It's one of our worst fears come true--a stranger gets a hold of your personal information and uses your hard earned money at their will. So, when Dawn Pritchard woke up on Sunday morning only to discover that her bank account was completely drained, she panicked. 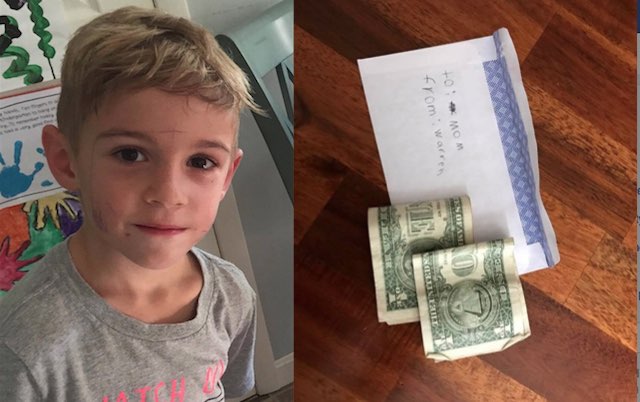 Dawn was devastated after receiving email after email from companies with receipts of "her" purchases. One, in particular, was a charge of $330 at a Dick's Sporting Goods in Eugene, Oregon. The mother, who lives in Sykesville, Maryland, could hardly contain her emotions after learning of this terrible news.

But, fortunately, Dawn wasn't alone in this hard time. And, once she had gotten off the phone with her bank, she received an unexpected surprise. Her son, Warren, handed her an envelope labeled "To: Mom, From: Warren". When Dawn opened up the envelope, she was amazed to find two dollars--courtesy of Warren's piggy bank fund.

"I was just so upset and frustrated," Dawn told the Good News Network. "My account was completely emptied. But as soon as I opened the envelope and saw that he had put his own money in there for me, all the negativity drained away. I'm beyond proud of him."

And, just like that, Warren's kind gesture saved the day. He even fixed her a homemade sandwich after that!