The Reason This Man Is Spending 48 Hours In The Life Of A Shelter Dog Will Leave You In AWE!

Most dogs see the cone of shame and run the other direction for fear of embarrassment. But for human Rob Morlino, there was no embarrassment in why he decided to strap the plastic funnel around his neck.

Rob is wearing the funnel to help homeless pets find their forever homes. 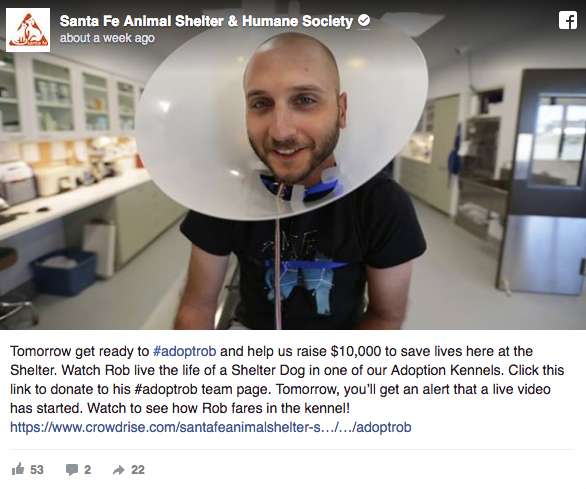 As the strategic outreach coordinator at New Mexico's Santa Fe Animal Shelter and Humane Society, he had no shame in admitting his cone-wearing, 48-hour stint in the kennel was a total publicity stunt.

Some publicity stunts are for good reason.

Rob broadcast his experience in the kennel for two days via Facebook Live. His goal? To raise $10,000 for the animal shelter.

For each donation--big and small--he gave donors an on-air shout out. Any takers on spending the full $10,000 would get the bragging rights of "adopting Rob." He promises lasagna and a dapper suit to the highest bidder.

Watch his video below and SHARE with friends to help Rob meet his goal for homeless pets!